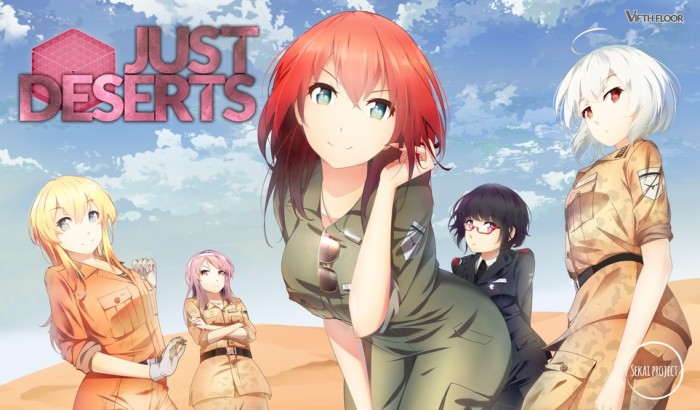 Developed by Vith Floor and published by Sekai Project on steam. Just Deserts is a sci-fi action dating sim where you play as a soldier who must protect a city from mysterious alien attacks, while at the same time you will also be seeking to capture the heart of your dream girl(s)! It should take you around 6 hours to complete 1 route. For a full completion maybe 30 hours?

In Just Deserts players will step into the combat boots of a soldier who must defend Aquarine City, after the neighboring city of Quentine was obliterated by a mysterious race of alien invaders. Assigned to a troop of highly-skilled and dangerously captivating girls, players will set out to save humankind and maybe even capture the heart of their dream girl(s) in the process. 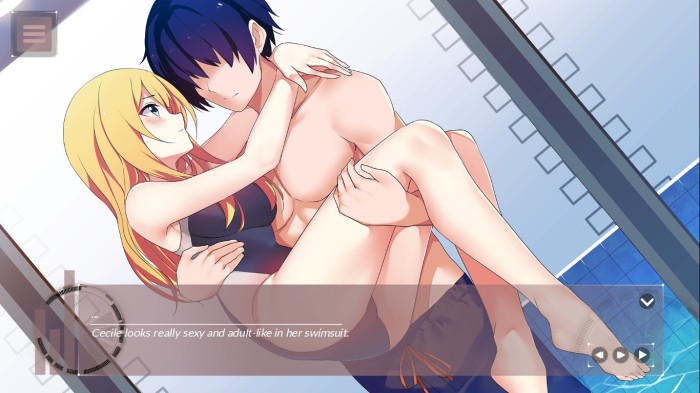 Thoughts On The Story

Moving onto the story, it is definitely one of the weaker aspects of this game. The overall plot is that the protagonist is immune against the aliens waves that the aliens used to disrupt normal troops brainwaves which in turn may kill them, and you have a month to find and destroy the alien ship. Okay with the plot explained let’s go into some issues with the plot.

The aliens are never explained they felt like they are just there for the sake of the plot which is to oppose the military base in the middle of a desert. Nothing was explained for the aliens they are just there taking on the role as being a obstacle in the story. The story feels “empty” and almost meaningless. For a game that has stat management my actions or anyone else’s actions for the most part did not change anything in between the game everything was predetermined, its only either you date 1 of the heroines or don’t at all. THE END.

In fact the only way you can change some actions is just by choosing which heroine you want to date and train with them, eat lunch or dinner with them, buy them medicine etc etc… It is like playing some shitty RPG game where a quest ask you to go to point A to get an item and bring it to point B that has no relation to the story at all while in the middle of the quest you start to question yourself “Why am I doing this? Oh just for the sake of doing it”. Even when the game tries to add in some kind of drama or emotional appeal, it always falls flat because It tries to have humor and pop references while trying to be deep and serious at a very random time hence the pacing of the game does not have any form of synergy. One scene has two characters quite literally killing each other over a game of Monopoly, while a later scene tries to hit home the reality of war and how not everyone can actually be saved. The writing is literally all over the place, from the random events you encounter to the moments leading up to the final boss. Overall the story just falls flat. 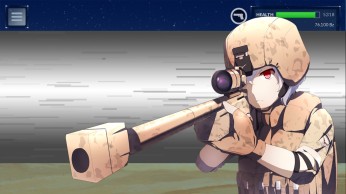 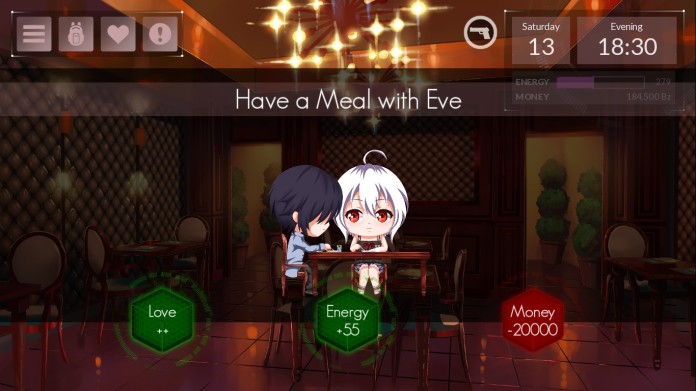 Some things I would like to say first is that the combat system feels very badly designed. The enemy always have an advantage over you no matter how small. Okay I get that they want to make the game challenging but the fact that the final boss fight can be affected by your strategy / actions at the front makes it so annoying and unnecessary, because when you make it to the final boss if you want to correct your mistake you have to backtrack an extremely huge amount. Not to mention backtracking will not solve anything if you do not have a plan. Basically to “beat” this game you will provably need some planning and luck. You need money to get gifts for the heroines or to complete a quest so that it can be used to get increase their affection for you.

Looks good so far? Right here comes my explanation of why I did not like it at all

The animation speed in battle is very slow and it cannot be skipped. In order to get money you will have to battle a lot all the little animations for hp decrease and status effects drag out the battle. So with all of this in place it takes out the enjoyment for me and making the game a grindfest and a waste of time looking at HP bars moving up or down.

In terms of my preferences of difficulty. I have played games harder than Just Deserts like kara no shoujo or Pretty x Cation [Note I am comparing them in terms of complexity/challenges only] but they are much more manageable than just deserts. Why?  because i am in full control of the game, there is no randomized events that are just there to screw your plan up or some RNG system that controls your fate. Lets take for example in just deserts I failed 2 hard quests that requires me to eat with a specific heroine for 5 times within 3 – 5 days(?) Seems pretty manageable right? But no..  I failed simply because the heroines just do not appear at the restaurant or camp cafe to eat, I managed to eat with them 4 times and after that for the final time I am required to eat with them time I checked for them to go back to the [eating location] but they just simply do not appear there and hence I have no way of completing the game at all. Basically the quests felt very random even with a plan there is a chance that you will fail. Failing of the quests does not give you a game over but it affects your relationship with the heroine and in turn affect the whole game which is just downright annoying to deal with. [Just like real life 😉]

But the most annoying part is the Money:

Everything is money in this game without money you pretty much can’t get anywhere in the story. Obviously you can earn money in this game but only through “patrols” but the money you earn from successfully completing patrols is pathetic and the items in the game are priced at a ridiculous amount. Those patrols will earn you $40,000 if you use a repellent to lower your chances of encountering aliens but to get the repellent you have to spend $20,000 first so with simple calculation a patrol with a repellent effect only earns you $20,000. Not to mention even with repellent there is still a chance that you will meet aliens and in the event that if you met 1, yup you guessed it.. That hard earned $20,000 is wasted.

So you literally save and reload a patrol until you get one specific item, that has a (ridiculous) high value, just to get some equipment and to do some activities / buy Items for your heroines. This just turns the game from “I just want to enjoy the story” to “I have to save and load to get specific items to enjoy the story”. It literally becomes a task and a game that becomes a task is not fun at all.

Lastly, the actual gameplay of Just Desert it uses a turn-based RPG battle system where you just battle against aliens you meet on your patrols. During your turn, you can attack, use an item, or, if you brought a partner, you can use a special ability. This is basically all of it is in a nutshell, with just a few more mechanics that does not really affect the gameplay in any way. It’s very simple, so simple that I got bored with it just after 5 patrols. It also doesn’t help that you can’t skip the animation for enemy attacks which are so slow. The battle system they use It’s too simple and never rewarding it never evolves it is always the same thing over and over again. To add in extra spice there is also an RNG system which is just there to piss you off in combat.

To be honest what got me looking forward to this game is provably the trailer which delivered. The art is consistent and very pleasing to the eye. The voice acting is also well done not to mention those accent are awesome. In connection to the character nationality. 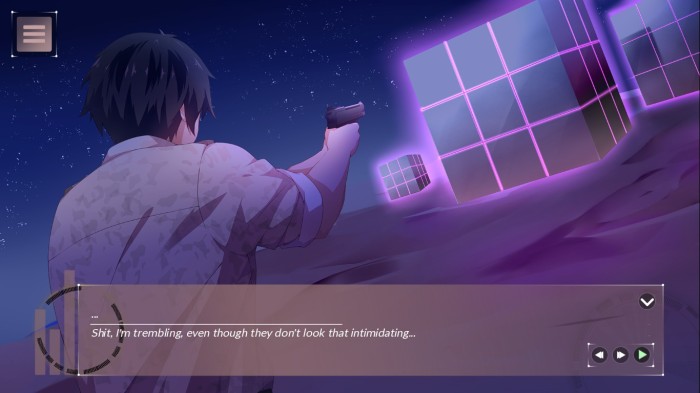 Just Desert is a disappointing game to me it just left me bored, confused, and frustrated. I know this isn’t a serious game, but even just the mechanics of the game itself and the writing just did not feel interesting enough to keep me from wanting more as it goes all over the place and never to places that really mattered. Though there’s a lot a replay value, it will be exactly same as your first playthrough and no changes just cut-scene changes and that is it.

If you’re looking for a good RPG experience, a good dating sim or a good VN experience, you won’t find one in Just Deserts.

This was really a hard decision I had to made I honestly wanted to recommend Just Deserts but I just can’t seem to find a good reason to do so, as I went back into my memories of the game bad points just kept on piling up. So I am really sorry even though that effort was put into developing Just Deserts. I just simply can’t recommend this game.