Developed by Namaage and published by Sekai Project onto steam. The Orchard of Stray Sheep is a short visual novel with a school theme on the surface set in a “academy” with 3 endings 2 being “Bad endings” and 1 being thee “True end”. On the surface The Orchard of Stray Sheep looks like your typical high school cliche visual novel, but it is not what you think it is, instead It has a darker side that you will discover as you read through the visual novel.

I will state this first before I start before reading The Orchard of Stray Sheep I have no knowledge of cherubim the garden of eden and dues ex machina. So I did my research on those to get a rough idea to of what The Orchard of Stray Sheep is referencing to. Next if you are wondering what is with the low score I gave it an explanation can be found below. It is separated from this area it’s because of its spoiler nature.

You will be met with a mystery at the very start wondering why are there metal rings above their heads which look like halos.

On a secluded island a small garden-like Academy stands alone a little Eden.. Ichirou Yamada which is the protaganist has been transferred there to work as a teacher. He is put in charge of Casserole, a beautiful, young girl who entered the school at the same time.

The days roll by at the Academy. Days that are boring but full of happiness a safe haven.
However, things are not what they seem at this “academy”…

Ichiro Yamada has finally found the peaceful days he’s always longed for, as well as that someone he wants to protect. He is still trying to overcome the loss and regret of his past amidst the warmth and tranquility of these days.

All the while trapped by the words of the girl he lost so long ago.

Visual Elements – For the visual aspects I think it is generally well done and the art style is very pleasing to the eye and it gives off a nice ambiance around the visual novel itself with the use of vivid colors. As for the backgrounds they blended in with the whole visual novel but there was inconsistency between them. There were some backgrounds that did not match their overall art style which looks extremely out of place.

Audio Elements – Relatively I enjoy the music for The Orchard of Stray Sheep it fits in with the mood perfectly and cues in at the right time, lets take for example when the protagonist have to meet the principle of the school the music changes to something much more intense which fits right in.

The translation seems a little off. I will leave an example, though there are more but this in particular has caught my attention. I have informed the translator for this. This section is written on June 24 2016. In the event in if in the future they patched it this will hold no value. 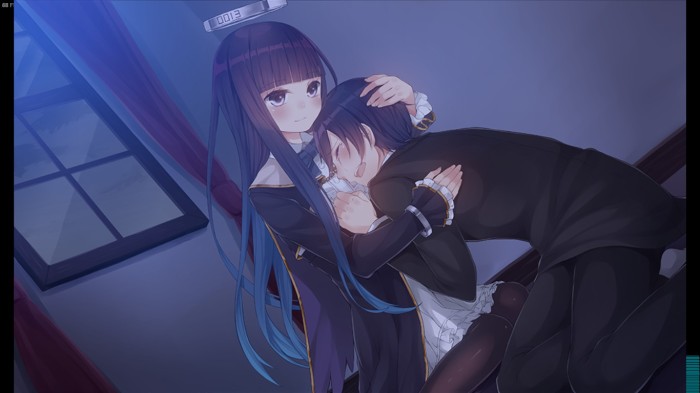 Lastly I would like to thank Sekai Project for providing me a review copy for The Orchard of Stray Sheep.

From here, below I will be explaining why I do not recommend The Orchard of Stray Sheep. So before you proceed, please do not read if you do not want to be spoilt because once you scroll pass the spoiler warning section everything contains massive spoilers. [Including screenshots]

Okay let’s go through the basics of what is happening first.

The term “graduation” is nothing more than an execution.

Teachers are teachers but they are also jailers in this case Ichirou Yamada which is the protagonist has been transferred there to work as a teacher. Teachers have 3 rules/ 3 conditions for overseeing the criminals condemned to death.

The first 2 conditions have to be met reason being it is to prevent them from dying of debility or suicide. They do this is because a condemn criminal mental state is very unstable because they do not know when they will be killed or executed and morning guards making rounds will strike fear into them that causes mental instability and so “The God that is” implemented a revolutionary measure to handle these problematic mentally unstable special A – class criminals which are condemned.

The measure was to brainwash via the brain machine interface above their heads which looks like halos. To put it simply it makes them forget their dark past and they will spend time in a special environment passing by days until their execution.

Whenever someone graduations the students left will go through adjustments which will erase their memory of the student that gone through graduation and their bodies will be  heavily modified too in order to keep their metal health stable.

So now as you can see in the above screen shots you could see that this character “Mincer” apparently has killed children and such and ate them. [Yeah you read that right she ATE them]

Now explanation of why I gave the story a low score

Okay if you have read until here by now you should have grasp the basics of how the academy works. Basically it is a prison to contain special criminals and they are kept they for some time until they graduate aka executed.

So the first problem or question I had was..

Why are they being detain for a period of time instead of being executed off instantly? I do not know it was not explained in the story at all.

Next the good end is extremely vague. What happened in the good end was Mart MK.2 Type L [The God That Is] bugs are being made know by Ichirou Yamada and she decided to let these 2 go just like this because she felt that she was no use anymore with a bug like this and decided to go into “sleep” mode hence all halos are deactivated [Yeah I am serious that was the ending]

The protagonist[Ichirou Yamada] managed to escape with his sister[Casserole] and it is a happy ending. But what about the other characters? Did they die? Did they fail to escape? Did they revert back to their old self?

None of that was explained at all hence it received a low score. No matter how much I justify that the story is unique in a way it there is just too much information missing. I really wanted to recommend it I really liked the art and story. The story had potential to be something unique but it was not being capitalized to which is a waste. With that I end my explanation here.

4 thoughts on “The Orchard of Stray Sheep – Review”