Sakura Dungeon is a first-person dungeon crawling RPG with visual novel elements set in a fantasy world where monsters and humans have been at war with one another for generations, but it leans towards more heavily on dungeon crawler aspect. Developed by winged cloud and published by Sekai project on steam.

In this story players will assume the role of Yomi, an ancient fox spirit who awakens after several hundred years of deep sleep to find that possession of her lovingly made dungeon has been taken from her! As if that wasn’t enough cause for alarm, Yomi has also been robbed of her power, leaving her weak and vulnerable. She soon discovers that it was the heroic knight, Ceri, who dared to wake her from her slumber, and after a brief fight and “negotiation,” Ceri decides to join her on an adventure to reclaim the dungeon!

Together, they will unearth great treasures, reveal secrets and hidden rooms, and recruit monster girls to fight by their side…all while avoiding traps, fighting off dangerous enemies and bosses across multiple floors, and uncovering the devious plans of the new dungeon lord. 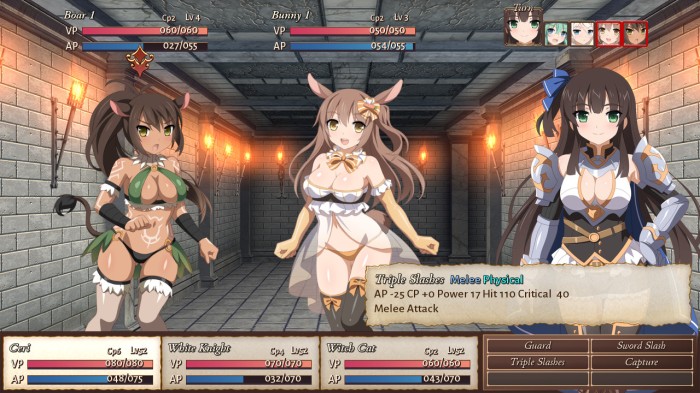 One of the most important mechanics of Sakura Dungeon is the ‘capture’ mechanic, where the player will be able to capture monster girls they encounter and add them to their party.

AP or Action point. A battle skill costs AP to take an action in her turn. When you enter combat, the AP of each character starts off between 40% to 80% of their maximum AP. When a character does not have enough AP to use a skill, the guard skill allows them to recover AP only and no VP will be recovered.

Pretty simple to understand? Okay so let’s go into some points I would want to point out. The very first problem is that the combat system that has been implemented into Sakura Dungeon sometimes feels a pain in the ass to deal with. Why it felt that way? Okay lets see.. I have the option of strong attack, weak attack, guard and some other spells. I would like to point out “Guard skill” first of that skill is useful of course because using that skill it lets me recover “AP” points so that I can spend them to attack BUT the guard skill does not recover health which is fine. But what ticks me off is that in battle there is almost no way to recover health, you can’t even use health potions during combat that were bought from the shop at town.

So let’s make it a situation where I am at 10 health and the opponent is also at 10 health [Basically a sudden death situation] and I have no “AP” left to do an attack and I would be forced to use guard skill which translates to death regardless of what I do. Because after guard, having no way to recover health once my turn is over despite recovering “AP” to attack I will not have any form of chance to even attack because I will be dead by then. Which obviously sucks especially when you are fighting a boss character and you are going to lose to it just simply because I have to guard because there are no other options available to me.

Of course despite having that as a form of annoyance to me I think that the there were some redeeming values in its gameplay. There was a large amount of detail lets take for example “CP” or concentration power. When a character’s CP reaches to 0, they gain the panicked condition. While she is panicking, she suffers a 25% penalty to her dodge, hit and critical chance. When her CP reaches to 10, she gains the flow condition. While flow is active, she gains a 25% bonus to her hit, dodge and critical chance. It also allows her to use skills that cost 1 or 2 CP at no cost. If she has a skill which costs 10 CP, she can use it while flow is active. When she does, flow will end. How long panic and flow last depends on the character’s mentality stat. [For your info I did not find that out by myself]

So in conclusion, there were its positive and negatives for the gameplay but overall I do like the fact that there were details that are being paid attention too and I did enjoyed crawling through its dungeons. 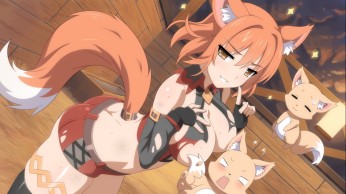 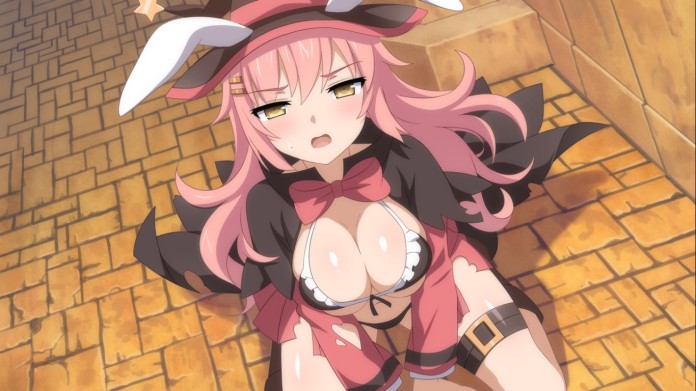 Audio and Visual Elements and Features

I love the artwork of the CGs they are all very pleasing to the eye. But for the soundtracks, I felt that they were lacking in soundtracks it failed to keep me pumped up in battle and it failed to make the whole game feel more immersive. Not to mention the soundtracks are not catchy at all and it did not capture my attention one bit.

To sum up Do I recommend this game?

Will I recommend Sakura Dungeon? This is a tough question to answer if I were to give a straight answer I would say yes, I do recommend Sakura Dungeon but to a certain extent. Why to a certain extent? It’s pretty simple if you are a person that has no interest in dungeon crawling this game is definitely not for you and it is also not one to be picked up to just give it a try, as I stated above the combat system is flawed in some ways.