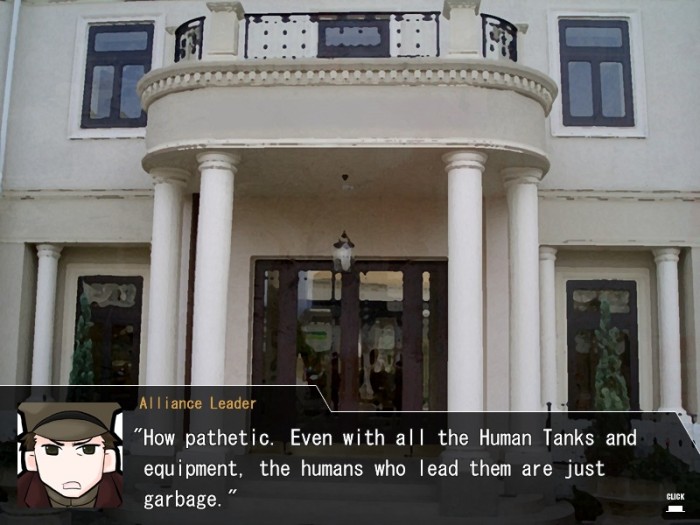 The land of Japon [Yes you read that right its’ Japon] has been split in two and thrown into war by two nations, the Empire of Japon and the Kingdom of Japon, who use biological weapons known as “Human Tanks” to fight their war. But now the war between these two has turned into a proxy war between the Human Tanks themselves.

The Empire of Japon and the Kingdom of Japon, two nations locked in war for an age, have finally agreed to a ceasefire to end the bloodshed. To improve relations between the two countries, and due to the decrease of the radiotoxic particles that the Human Tanks use as fuel, the tanks themselves are about to disappear from all of Japon.

Our hero, Yatarou Shirahase, acting as an officer in the Imperial army, is dispatched on a mission to subjugate the Human Tanks. He must now battle an enemy of the same make as his own beloved company of Human Tanks.

Seek out, charge and self-destruct to destroy your enemies in this strategy game! Lead your Human Tanks and complete your missions! Scout out the enemy and plan your strategy, but remember that your tanks will go down in one hit and be lost forever.

Before a battle starts you will get to deploy and place your human tanks at spots on the map of course that comes to some planning, clumping them up is s smart choice because a shock tank could kill them all at once if you are not careful. Same as the opposite spread them far apart they will take a long time to move near the enemies and may die to a random blind shot made by the AI which sucks if your key unit gets taken down by a blind shot losing the whole battle instantly.

Some things I would like to note is that sometimes the AI feels a too strong but sometimes the AI feels plain stupid in my experience so far. Lets take for example there are battles where I had and I was standing directly in front of the enemy and they did not attack my unit that was placed in front of them at all, instead they opted to attack a random spot with nothing on it which is kind of weird in my opinion.

But overall gameplay wise it is enjoyable there is strategy which will be used and some luck may be involved like firing a blind shot and killing the opponent and then feeling the sense of saticfication that you just destroyed the opponent by pure luck.

Will I recommend War of the Human Tanks – Limited Operations? This is a tough one to answer if I were to give a verdict based on my personal taste I will be sanding on a neutral ground for this. However do go for it if you like strategy games and chibi art style. Lastly I would like to thank FruitBat Factory for providing me with a review copy. Yes Hotaru you are cute. 😀

2 thoughts on “War of the Human Tanks – Limited Operations – Review”