Please do note this is a spoiler free review so I will not go to much into details as that will lead to a spoiler.

Danganronpa 2: Goodbye Despair, developed by Spike Chunsoft and published by Spike Chunsoft Co., Ltd. themselves. Danganronpa 2: Goodbye Despair sequel to Danganronpa: Trigger Happy Havoc is not your typical visual novel where you will find romance and everything goes smoothly. Characters will die whether you hate them or love them. It has the touch of mystery, horror, point and click and detective work all in the mix of this visual novel not to mention the story is very interesting with and filled with unexpected twists around. 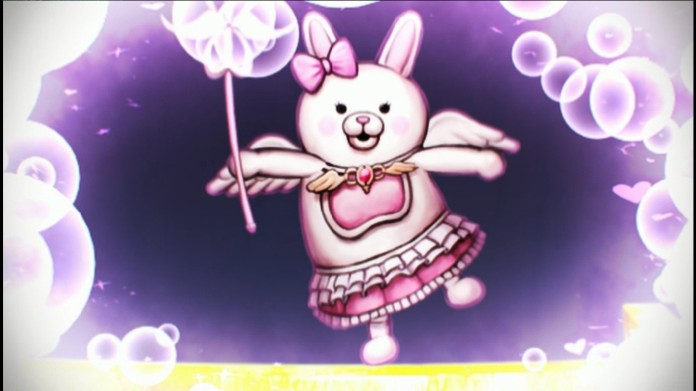 The story is definitely one of the most interesting mystery and crazy story I have read. It has many plot twists and it is very confusing in a sense that it manages to conceal the truth until the very end of every case. I always end up suspecting the wrong character as the murderer, which surprises me and the cases are very detailed . [Especially for the final case]

The story takes place after the events of Danganronpa: Trigger Happy Havoc. You will be placed into the shoes of Hajime Hinata. Who appears to be in front of Hope’s Peak Academy a government-funded school for the privileged elite of society. A door then suddenly appears in front Hajime Hinata which leads to a classrooms where he meets his classmates that has also ended up in the same situation as him of not knowing how they ended up in the class room. After some verbal exchanges in between them, their teacher named Usami revealed to them that they are on a school trip on Jabberwock Island a paradise-like island. Usami then tells them they are on a school trip and they are to befriend each other to gain hope fragments and make their hope grow. What could go wrong here? Right? 🙂 Of course not!! What are you thinking? Upupupupu Monokuma suddenly appears and takes control of the island, announcing that the students must participate in his murderous game if they wish to escape. Leaving them in despair, being placed in a game where they are being pressured subconsciously to kill their friend or not to kill in order to escape. But if they do not kill they may become the next target with all these pressure building up around them it is bound that someone will give in to it and it starts to turn ugly for them.

What is Jabberwock Island?

It is once a popular tourist destination, that is now an uninhabited island remains oddly pristine. You and your classmates at the elite Hope’s Peak Academy have been brought to this island by your super-cute teacher for a “lovey-dovey, heart-throbbing school trip.” Everyone seems to be having fun in the sun…until Monokuma returns to restart his murderous game! Trapped on this island of mutual killing, your only hope of escape rests in solving the island’s mysteries. But be warned—sometimes the truth can be its own despair…

Characters are very memorable, each of them are unique and have some special traits about them. Personally my favorite character in Danganronpa 2: Goodbye Despair is Nanami Chiaki 七海 千秋 The Ultimate Gamer, she has that warm and cute side to her and is always there for Hajime Hinata [You in this case]. She is also highly knowledgeable about all genres of video games. She has a tendency to collect her thoughts before she starts speaking, so when she meets someone for the first time, the conversation is rather slow.
Though she’s very passionate about video games, if Nanami Chiaki gets too comfortable she falls asleep, when she is standing up or midway through a conversation or even in a tense situation where killings are occurring.

Visual Elements – Many things to note here is that the backgrounds, CGs and character sprites used in Danganronpa 2: Goodbye Despair are very consistent with each other in turn made the whole visual novel as whole looks smoother. This is really a huge thing for me overall I absolutely adore the artstyle used in Danganronpa 2: Goodbye Despair. I have played many visual novels where the character sprites are not consistent with the backgrounds at all and then in turn they do not blend in nicely causing them to not look nice or“smooth” at all. The sprites used are pretty much being used all the time in game except for the CGs.

Though many people may have realized why is blood pink? Spike Chunsoft has opted to use pink blood, which removes some of the graphical of each murder scene. Which is alright for me as I think the pink blood fits in and does not feel out of place in any way, in fact if I were to choose the blood color I will choose the pink that Spike Chunsoft has used even it looks more “kiddy” it makes the whole visual novel looks better too and fits in nicely with all the craziness happening.

Audio Elements – Music is a very important factor to consider in a visual novel because music has a great ability to set the mood and make things flow from then on. Though Danganronpa 2: Goodbye Despair reused many of the first game’s music but added a few new additions. Danganronpa 2: Goodbye Despair definitely has this executed perfectly. Each time the “phase” of the story chances, the BGM would change with it to set the mood and tension around the characters. Lets take for example in “logic dive” it uses this song called “Drive Drive”it is a new game mode that has been added into, I absolutely love the BGM as it is so fast paced and fits in with all the action that is going on. 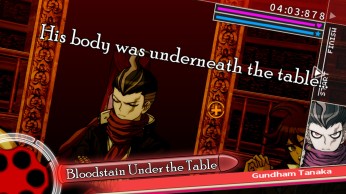 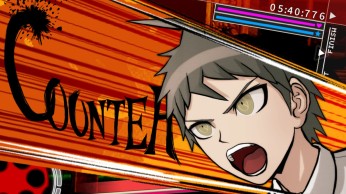 Will I recommend this ? Simple answer is yes. I would definitely recommend this awesome visual novel if you are the type of person who looks for gameplay in a visual novel as this definitely has loads of gameplay to offer and for people who loves detective work with dark mysteries waiting to be uncovered and solved go for it. Honestly I am not a fan of having gameplay in my visual novel I am more of the type of person that prefers to just click on my mouse all day long, but Danganronpa 2: Goodbye Despair has so much to offer, as it manages to rope me into with its rich story and great music with good gameplay. Though there are some things to point out on “hangman’s gambit” in Danganronpa 2: Goodbye Despair compared to  Danganronpa: Trigger Happy Havoc hangman gambit in Danganronpa 2 has quite a difficulty spike as it requires more attention to get the letters right and has a higher chance of failing. [I failed 2 – 3 times for the final case]

Side Note and Disclaimer

I have been provided a review copy for Danganronpa 2: Goodbye Despair but it has no impact on this review in any way.

What is it about?

It explores what would have happened if Makoto Naegi had received the Exit Button from the Monomono machine in the beginning of the game, which helps him slowly regain his memories.  Will he just find more despair?