Atom Grrrl!!! is a kinetic novel where all you do is just read through and there will be no choices to be made at all. Developed by Cosmillica and published by Sekai Project. I will be leaving relevant links below to its steam store page and Denpasoft [18+] to purchase just in case some people are wondering how to buy these. 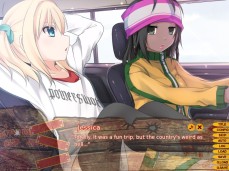 Returning to Las Vegas after studying abroad on the island nation of Yamato, Jessica L. Huster comes back to lead her gang, “The 99th Floor,” only to find out that her family is in big trouble with the dominating mafia boss, Big E. Jessica and her friend Anna come together to face trouble head-on, however Jessica’s cousin, Very could turn out to be a “very” big problem for the both of them..

This adventure is unlike any you have previously experienced, and the girls in Atom GRRRL!! are anything but sweet. On the rough streets of America, scum emerges from the shadows at night, and so do these naughty girls as they go to reclaim their territory.

The humor is raunchy; the style is right out of a Tarantino film. In Atom GRRRL!! nothing is sacred and there is no right or wrong, it is simply just hardcore, in-your-face America. Follow Jessica L. Huster as she returns home to the crime-ridden streets of America in Atom GRRRL!! 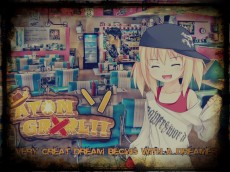 Visual elements – CGs are cute and are consistent with the character sprites which is a plus for me. But not really a fan of the backgrounds, as the backgrounds are actual images but with some filters applied. Well this is personal preference here as I would prefer a drawn background for sure.

Audio elements – I really love the music used in Atom Grrrl!!! Its really catchy and awesome especially “Atombeat is Lovebeat” though my personal favorite is “Whole Lotta Love”. It features OP and ED videos,music player, and there is also full Japanese voice dub. About the Japanese voice dub it is relatively alright, but a character voice has brought my attention which is “Anna” her voice just does not suit her character overall. Anna looks cute but her voice is low so when I first heard her voice my reaction was ” o.O? Is that her voice?”

Do I recommend this visual novel? This is a tough one honestly so lets just say, I am taking on a neutral stand for this meaning yes I do recommend it but to a certain extent. Why to a certain extent you ask? it is just not my cup of tea overall. Well the humor value is great and its good if you are looking for something slightly different. But looking from a bigger perspective Atom Grrrl!!! as much I hate to say this there are better VNs out there that has yuri in it.

Before starting off Atom Grrrl!!! my starting impression was “oh its yuri it is going to be good” mainly because I am a huge fan of yuri myself and what I have gotten instead was a  well.. yuri for sure and some laughs. But I just can’t seem to get into the story despite it having humor value it fails to absorb me into the story. It feels like watching a comedy skit that is funny and wacky at the same time but just not interesting at all, and the ending could have been better. The ending is a little to vague and is not satisfying 1 bit. The most it did was leaving a smile on my face and that’s it…

Lastly I would like to thank Sekai Project for providing me a review copy.

Side note I still got no idea how to pronounce “Grrrl!!!” at all.