Lucy -The Eternity She Wished For- developed by Modern Visual Arts Laboratory or “Mvizlab” in short and published by Modern Visual Arts Laboratory themselves they are an indie game development team made in Korea and is very new but to my surprise their first visual novel is surprisingly good I was not expecting this quality at all. In Lucy -The Eternity She Wished For- players are given choices to make in the game and depending on your choices it will change the outcome of the story. It features 2 or 3 endings? 1 of them being a Bad end and the other being a Good end. Relevant links will be can be found below.

I want to clear this up first many people has been saying it reminds them of planetarian ~the reverie of a little planet~ but for me it did not 1 bit, firstly the setting of area is totally different though theme wise it is same both have robots which looks very human and that is the only similarities I have seen in my perspective. Lucy -The Eternity She Wished For-  is a visual novel with choices but planetarian is a kinetic novel. But I will not be comparing this to planetarian as that will not be fair at all, so with all that said lets continue.

Lucy ~The eternity she wished for~ is a Visual Novel, about a boy and an android. You play as the boy, who faces decisions and moral dilemmas that he struggles constantly in this near-future world.

In the near future, androids have become the way of the norm they can be found everywhere in human daily lives. Emotionless husks of metal have become a part of human society, much to the dismay of the boy because he had always preferred the “old methods”. The robot he found at the dump site though, this one was different. It laughed, it cried, it smiled, just like a human… It has emotions..

It has a relatively unique touch in which in turn led to a good build up that I have felt, as the reader can go through happy and sad moments together with Lucy. I loved the way that everything happens so fast and it really shows how much can something change in a split second. It is quite an emotional story but it did not made me shed a tear but it did made me feel angry towards a certain character in this particular VN. Why was I angry you ask? I am really sorry as if it were to be explained it would be a spoiler.

Background, CGs  art – Backgrounds are generally average nothing too fancy to talk about the background art, but as for the CGs I felt it is a little wasted not saying that it is bad in any way but the CGs they tend to use glares to cover up the background which makes it bright which is good, but at the same time taking away the atmosphere that it could have been created with backgrounds to add more to the game as a whole. Something which caught my attention is that the UI or menu is very beautifully done I love the direction off the VN that it makes the menu and UI looks very realistic which contributes greatly to the overall atmosphere.

Audio Elements – Nothing really stand out for the audio elements except for the fact that it cues in nicely and properly to fit in with the mood of the characters in turn manages to set the atmosphere perfectly every time. There is also voice acting for Lucy available both in Korean and Japanese voice. 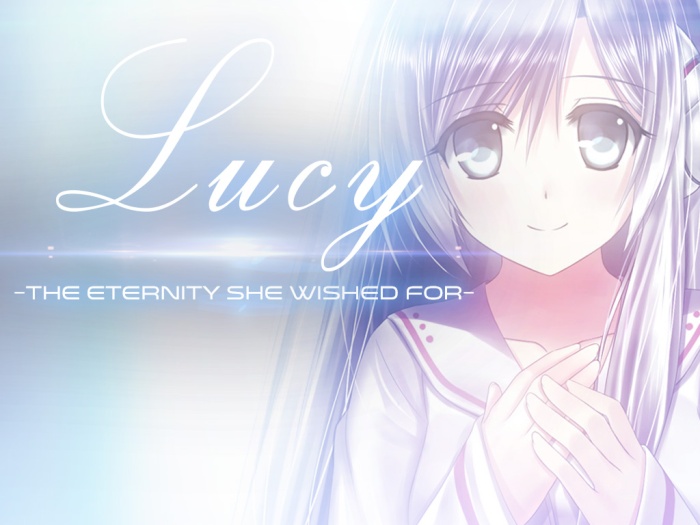 To sum up will I recommend Lucy -The Eternity She Wished For- ? Simple answer yes, it is well worth your time and money for sure and for people who likes a sad story or maybe Sci-Fi be sure to get this game. I think it’s really nice that they tried to include the player into the game as much as possible like asking the reader to enter their name and doing all those check ups when Lucy gets started up, it’s very surprising looking at the amount of effort they put into their first VN which is a good thing. Endings are worth to get too and for people who do not know after getting the ending you want there is also after story in the extra section that will show what happened to the main character after all the events happened which is a nice touch because I think anybody after they have reached an ending they would surely be very curious and will want to know what happen after that. Lastly I would like to thank Modern Visual Labs for providing me a review copy.

Get it here on steam store page!

2 thoughts on “Lucy -The Eternity She Wished For- Review”