Clannad Official English Release, Published on steam by Sekai Project, Developed by Key, who has also developed visual novels like Kanon, Air and Little Busters and many more. Through the course of the visual novel Clannad with over 8 heroines for you to choose from to build a relationship with However, there are also 3 other characters, one of which doesn’t appear in the anime those three aren’t really relationship choices but it is as much as just finding out more about whats going on in the world of Clannad. In total, there are over 11 routes in Clannad. Being themed around family, friendships, bonds, and relationship.

“Do you love this school? I have to say I love it very, very much. But soon, everything changes. At least, eventually. Fun things, happy things, they will all change some day, you know. But, can you still love this place?” – Nagisa Furukawa

Clannad starts off in a dream like world where everything appears to be covered in snow. This world is called the Illusionary World. There is no life in this world, except for one young girl and a robot made out of junk.

The story quickly shifts to the real world and get to see the world of Clannad through the eyes of Tomoya Okazaki an emotionally distant delinquent student, a student at Hikarizara Private High School. After losing his mother in an incident and subsequently falling victim to an abusive, alcoholic father. Unable to play basketball after that fight, Tomoya becomes a student that just hate the thought of school, showing up late to class and not trying in the classes he does show up to become a “normal” thing for him. He spends most of his time at Youhei Sunohara’s dormitory. Tomoya Okazaki who have a friend, provably his only friend, Sunohara, a blond and is very energetic who is also a delinquent, that is Tomoya’s best friend. Together, the two scrape by school, coming to class only during lunch break, and then sleeping through all of his other classes, and on some days just outright skips school all together.

One day, being late for school, Tomoya comes across a girl who wears the same uniform as him. She is standing at the bottom of the hill leading to the school trying to motivate herself to go to school. Together, Tomoya and the girl, who we find later is named Nagisa Furukawa who is repeating the year due to a severe illness, enlists Okazaki to help revive the school’s drama club. With nothing much else going on in his life, Okazaki agrees to help, making friends with many other students in the school along the way, and overcoming all of the different problems and challenges that they face. From there, the story branches out into many routes. 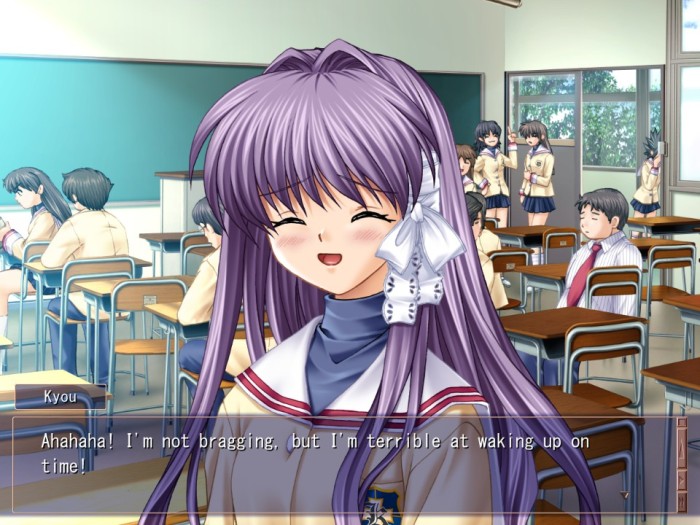 All of the routes in the main part of the game are balanced very well with humor matched with strong drama, the routes/characters are well written. Kyou is brash, loud, and quick to anger often flinging a dictionary as a weapon. She mirrors Tomoya in many ways as she does show a softer side with how she treats her twin sister, Ryou, and her pet, Botan. Fuko is hilarious with her love of star fish and her suspicion that Tomoya is, “a strange person”. Kotomi, a genius, is very innocent and harbors an obsessive fear of bullies. Those are just a few of the colorful and interesting personalities you will come across while reading Clannad. And finally Nagisa

Nagisa, loves Dango, but has very little self-confidence. Her interactions with Tomoya vary from sweet and cute, to serious, In that sense, she feels very real. She may act childish, but she is in fact very mature,insecure, and lacking confidence in herself.

The comedy in Clannad is hilarious, the drama is what makes it an unforgettable experience. Many characters have experienced death or suffered emotional trauma in the past, or might be struggling to carve out a new identity. Kotomi’s route, and Fuko’s route stand out in the first part of Clannad as two of the strongest stories. Both deal with heavily with the family theme, and coping mechanisms to tragic events. (I can’t say much here because spoilers..) I really wish I could say more but I would just spoil it. 😦

We also learn more about the Illusionary World and the two inhabitants of it. by playing through Clannad. The story of the Illusionary World is advanced slowly, and in the After Story, it finally plays a very important part of the story as a whole.
Without After Story, Clannad is a cute, bittersweet visual novel with some very good moments and a great story. With After Story, Clannad becomes something different. It becomes a valuable experience that you will never forget.

What makes Clannad great is, the soundtrack. The soundtrack list is very huge, having over 45 different music, 4 of them are vocal pieces. All of the soundtracks are memorable and are perfect in setting the mood of the game having the ability to alter your mood just through music and making you shed a tear. Ranging from from silly to energetic music, to slow, atmospheric songs, that will make you feel time around you has slowed down to a standstill and you’re just indulging in the beautiful music. For those who have watched the Anime, when you start the Visual Novel with the in game menu you will be hit with nostalgia in an instant because that is what happened to me, it’s like everything replayed in my head in that instant just by listening to the soundtrack.
Among all my favorite is, Roaring Tides, I really love it so much it is a really a beautiful soundtrack very outstanding. Sometimes when listening to this particular soundtrack, Roaring Tides if I do not keep my emotions controlled I may tear a little.

There are new features to clannad 1 of them being a HD Upgrade: All visuals have been upgraded to 1280×960
Dangopedia that is exclusive to the english version, the Dangopedia is an Encyclopedia that is a handy reference tool for understanding aspects of Japanese tradition and pop culture.

Achievements, Clannad has achievements that are steam supported! There’s also an in-game menu to review your achievement progress.

I would highly recommend anyone to read this Visual Novel because giving this a miss means you are really missing out something really good. In fact you are missing a very valuable experience it will change how you view your world completely. Clannad has a story with a great message, a message of showing the importance of family, friends and so much more.

And.. If you are a “sensitive” person like me I suggest getting at least 2 boxes of tissue prepared.

The Art, The Story, The Music, The Characters in this Visual novel is just amazing. The characters surpass any Visual Novels in terms of growth, complexity, and how I am able to connect to them. Clannad is a masterpiece(kamige) in both story telling and character development. A thing i did not mention is that Clannad also changed how I viewed people around me in fact it changed me quite a lot it, because teaches me how to be appreciative to people and appreciate the things you have because no matter how bad you think your situation is there is always someone is out there alone and lonely suffering in a situation far worse than you. It also showed me that people, no matter the ambitions or situation, can live a happy life. It showed a simple yet happy life, it showed that everyone has issues they need to learn from and overcome. Clannad showed me the strength of family, and the weaknesses of it at the same time. It’s a story that everyone can relate to.

One thought on “Clannad – Review”