Over The Hills and Far Away is a kinetic Visual Novel by WarGirl Games that is available on the steam sore page for originally $12.99 but have been reduced to $8.99

Based on feedback we’ve received from players regarding the pricing of Over The Hills And Far Away, we’ve decided to reduce the current price from $12.99 to $8.99. We feel this is more in line with what people expect from visual novels on Steam, and will make the game more accessible. More than anything, we want to reach as many people as possible with this story and we understand that the original pricing may have seemed a bit much. This is the first title we’ve released on Steam after all, so we’re still learning.

Despite the game only being up for two days, we think that making this change sooner rather than later is a wise move. If you purchased the game at the full price of $12.99, we want to offer you the chance for a free key of the Soundtrack DLC, to make up for paying those extra few dollars. Please get in contact, and have your Steam receipt on hand as proof of purchase, and we’ll send on a free key. source 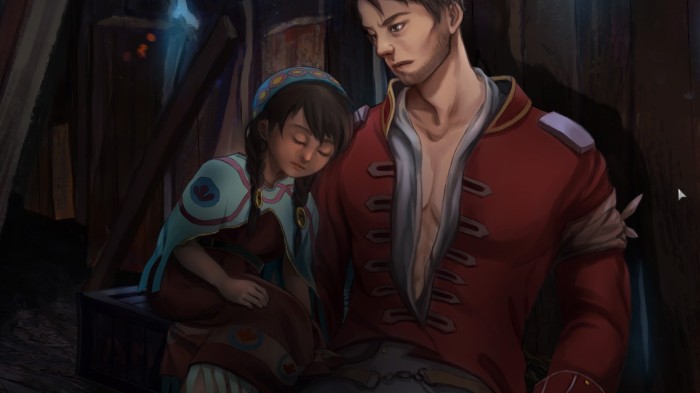 The story 6/10
The story of this Visual Novel is being themed in a War of 1812 get to see this war through Aubrey eyes, a “Redcoat”, deserted of his regiment and is fleeing towards south in hopes of starting a new life for himself. While running away he ran into rain and must seek shelter quickly to keep himself alive, from freezing to death, from there he met a girl in the abandoned barn named “Mai”. How will things go on from there? Read the story to find out more.

Audio and Visual Elements 6.5/10
The visual elements is unique in a sense that they do not use the “anime art style” instead they used pastel painting art style something which is very distinct from most other Visual Novels that are on steam currently. One thing that i have taken notice of is that the sprites feels a little off other than that the Visual Elements are well done.

Music
The music sets fits in well with the environment but overall it felt average nothing too “flashy” or out of the ordinary. Nothing really much to say for this aspect.

To sum up 6.5/10
I would recommend this Visual Novel if you are looking for something “fresh” or slightly different from the other Visual Novels that are currently on steam as of now.

Atogaki
This Visual Novel have an interesting original setting, and Over The Hills And Far Away definitely brings something valuable to the table. I don’t know much about war in fact I do not know anything about war or what people will feel when they are in a war but after reading through Over The Hills and Far Away I definitely have learned something valuable.
But 1 of the main reason i gave the story a score of 6/10 is because the story is a little to “predictable” but overall still an intresting story regardless.