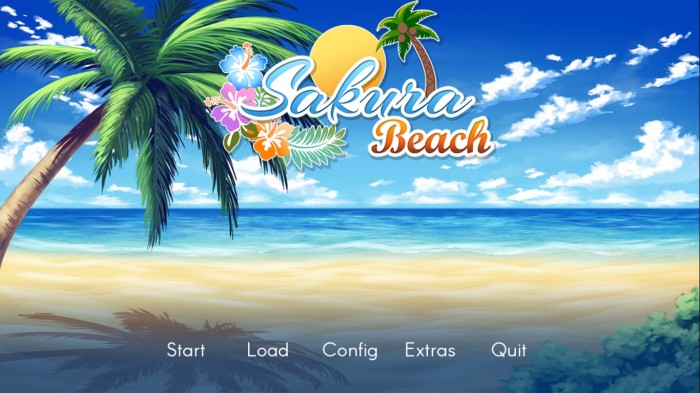 Sakura Beach a short visual novel that has a slice of life feeling to it developed by Winged Cloud giving players choices to make which will affect the outcome at the end will take around 2-3 hours to complete 1 read through.

The Story 5.5/10
The game starts of with the protagonist named Seiji a space fanatic daydreaming about the universe in the lobby of a hotel to be only snapped out of it by 1 of his childhood friend.
While on a vacation for a week to the beach with his two childhood friends, all he ever thought was to take out his telescope and look at the stars. But during the course of the week the protagonist gradually, begins to realize that his childhood friends want him to pay attention to them instead of constellations…

A note: There is yuri content in it and it’s really pleasing to the eye to but the yuri scenes feels a little out-of-place but do not let this stop you from getting this VN.

Audio and Visual elements 7/10
For the visual elements, i will split it into 2 sections because there is 2 very distinctive art style mixed in it. The background art and character art.

BACKGROUND art – I find it beautiful as there are hints of pastel color paintings used in the backgrounds which i find it unique and it really blends well with the character designs.
CHARACTER art – A thing you would surely realize is that the design of the character are different from the other sakura games which i find it good as it gives a fresh new look to the characters.

AUDIO – Nothing to flashy or good here just average but It manages to set the mood for every situation, depicting the environment of playfulness or seriousness when it needs to do so.